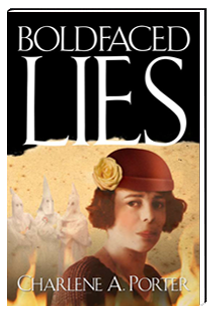 Against the backdrop of the majestic Rocky Mountains, at a time when Denver still boasted of its silver and gold rush days, the Ku Klux Klan steamrolled into the city, bringing horror and destruction to 1920s Colorado. Business tycoons, factory workers, elected officials, police officers, high-ranking judges, society women, and even clergy were among the 50,000 members.

A riveting novel about a disturbing yet true chapter in our nation’s history, Boldfaced Lies follows the story of Margaret Browne, the wife of a ruthless and ambitious Klan leader. Desperate to escape Devin’s abuse, Margaret lives in fear of the power he now wields. When her father reveals a family secret buried for generations, Margaret pieces together the shards of her past and learns she is living the deadliest secret of all.